I’m steering my Ph.D. towards studying how things like moderation policies impact our information ecosystem, that is, the way people consume and produce content online (more on that later, I hope).

In any case, in EPFL we have to do a “candidacy exam” where the Ph.D. student has to discuss three papers broadly related to the research direction they want to pursue. As I did my literature review, a paper that stood out was “Hidden resilience and adaptive dynamics of the global online hate ecology”. Three reasons for that:

When I saw all of this I knew that I had to choose this paper, after all, this would be an important reference for my research. In what follows, I discuss a bit of the problem the paper tackles, the approach taken by the authors, and my thoughts about it. In short, the TL;DR; is that I find their approach problematic and do not think this is the kind of research that should be guiding moderation policies. 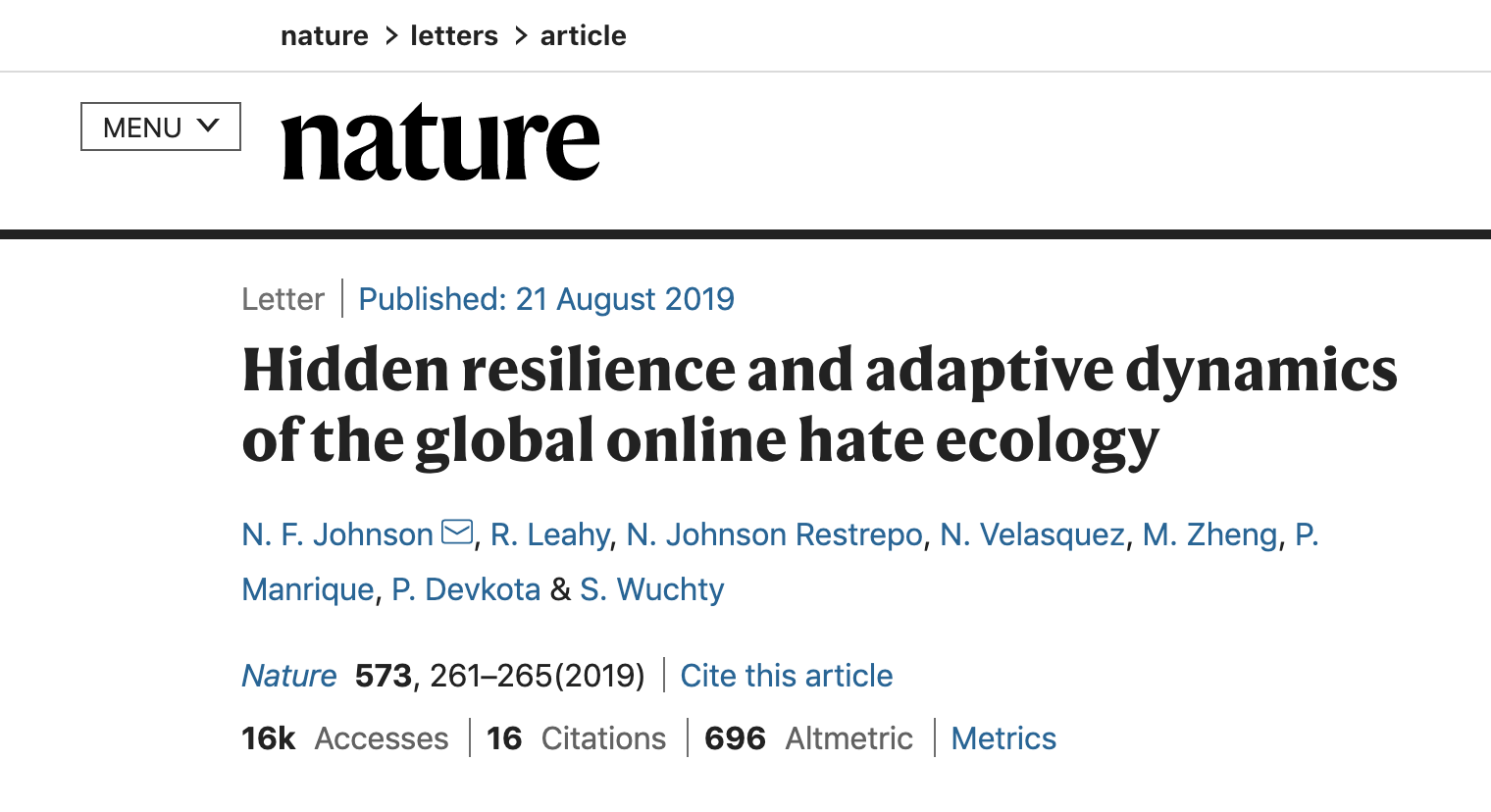 The paper considers how moderation policies may impact fringe groups, but considers these groups not as atomic entities that exist in a single social network, but as distributed entities in a network-of-networks spread throughout the world on many different platforms (Facebook, VK, Telegram, etc).

The authors propose to examine how different intervention policies are effective in diminishing online hate in this distributed scenario. This question is particularly important because we know very little about the efficacy of moderation measurements outside of a single platform. For example, Chandrasekharan et al. have studied the efficacy of a series of Reddit bans in the subsequent behavior of users on Reddit. They found that in Reddit, users who were active in the banned subreddits became less toxic in subsequent Reddit posts (in other subreddits, evidently).

Yet, what happens when a subreddit gets banned and users migrate to other platforms?

Notice that this is not a “what-if”, but something that has happened a couple of times in the past. In the very event studied by Chandrasekharan, many of the subreddits (e.g. CoonTown or FatPeopleHate) migrated to voat.co, an alternative platform committed to lower moderation standards (to put it nicely, hahaha). In more recent years, the same happened with the infamous /r/Incels, which created their own standalone website Incels.co, as well as with the remarkably active /r/The_Donald subreddit, which after issues with Reddit moderation created thedonald.win.

In this context, there is clearly a trade-off happening:

Now that I have hopefully convinced you that this is an important problem, let’s move to the next obvious thing: what did the paper do?

A nature paper is written for presentation, and not for analysis. So forgive me if I flip the paper upside down as I discuss it. But I will go for what seems to me to be the most logical route.

Their data and empirical observations

A considerable part of the paper consists of discussing their data: a bunch of hateful groups from VKontakte (a Russian social network) and Facebook. Their observations can be broadly grouped into three points.

While these are interesting findings, I see many problems with their approach. My first set of complaints have to do with how little the authors describe and explore their data, using it only as a motivation. For example, I really wonder what is the prevalence of the so-called “bridges” between hate clusters? How did the authors determine the location of hateful clusters? How did the authors ascertain that the re-wiring that happened in the KKK clusters was really something uncommon for social media networks? What are the baselines? Unfortunately, I did not find answers for these in supplementary materials (which I hoped I would).

More broadly, however, I think that an even bigger issue here is that the representativeness of the data is never discussed. I wanted to check how the authors sampled the data and found the following statement in supplementary materials:

Which is clearly wrong! Their data is a sample, they used a graph-based sampling approach which does not necessarily give them the full picture. Indeed, it could very well be that the “hateful communities network” is super fragmented and they only got one of its connected components.

Besides describing this data, the paper main result is obtained through a toy ring-hub model. Which I illustrate and describe below: 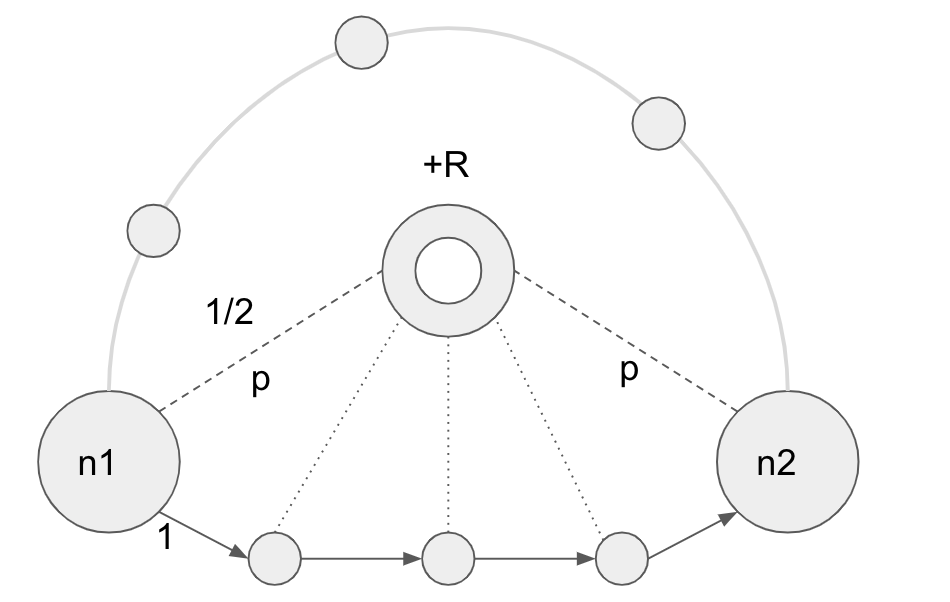 Illustration of their model.

They then predict two possible for scenarios for this model:

This illustrates the main finding of the paper. That moderation can have a backlash effect. It could be that moderating links actually make things worse! While this is interesting, I find that the paper does very little to address the obvious limitations here: this is a tremendously specific model, and researchers do very little to justify why it makes sense that:

They use this main model to motivate a range of moderation measures, and they additionally justify each policy with an additional model (that has nothing to do with this ring-hub model). So for example, one of the moderation interventions they propose is to randomly ban users so as to keep hateful networks “under control”, but never completely destroy them. Other moderation interventions go way ahead and propose things that in my opinion are largely unjustified by this main model they propose. For example, they go as far as to propose to have a set of accounts to foster debate between dissenting hateful groups (think like paganists and Christian white supremacists).

Models are great when they are simple (and their assumptions very reasonable) and can explain a variety of phenomena. Yet, these are not the case for the models proposed. The main ring-hub model is far from “realistic”, and although it is a cool result, I think it is worth very little without empirical validation. The intervention-specific models are also questionable since the authors use a completely different model for each set of policies! You can surely find a model that presents some expected behavior that you want, but the big question is whether the model is appropriate.

To sum up, the paper has limitations related to their data sample (and how much they explore it), and take modeling decisions that are questionable (as perhaps any model decision can be). Yet, I would like to zoom out a bit and really discuss why I think that this approach won’t work for guiding internet policy. When looking at other fields that deal with very complex systems like Medicine or Economics, we have a clear “ladder” that must be climbed for a research finding to bleed into practice. Modeling is often one of the first rungs of this ladder, and it makes sense since it motivates empirical inspection of a phenomenon. Yet, to suggest a drug or an economic policy with a simple model sounds inappropriate (even for someone like me who is only vaguely familiar with research in these areas).

If so, why should things be different for computational social science? Why should we run simulations on custom-made networks and assume that this is a good validation of a moderation policy? I firmly believe we should not. If anything, social networks can provide researchers with valuable data that allow for good empirical research (as it has), and I can’t see any reason why this should not be done as in economics: we need good observational studies, natural experiments, and (when possible) randomized control trials. It won’t be amidst the mess of social network data that model-driven policymaking will make a splash!